Came across this article about Bill Gate's rugs being beaten clean, and was struck by this paragraph:

The reports about Gates' personal life threaten to overshadow his carefully crafted image as a global do-gooder who, in an era of yawning economic inequality, harnessed his immense fortune (a net worth of about $130 billion, according to Forbes) for ambitious charitable projects and scientific research.

This weekend Josh and I had a chance to visit the DIA. While there we spent a little time with the impressionists and (thanks to a silly footwear choice) ended up sitting in front of this painting:

French painter Georges Seurat's technique for portraying the play of light using tiny brushstrokes of contrasting colors is known as "Pointillism" — a practice applying small strokes or dots of color to a surface so that from a distance they visually blend together. #FeaturedArt pic.twitter.com/L2Fxfph258

I'm not a big fan of Seurat in general, or pointillism specifically, and truth be told I have always hated this frame. Blame it on the 'stenciling' craze of the mid-90s, but I just never liked the look of the paint against the wood of this frame. Still, after reading that article I couldn't stop thinking about how the people who "frame" the story are also the people who craft the story; I kept coming back to the Seurat frame.
(It didn't help that I was watching a series on a hungry American designer last night, and there were shades of this idea in the way he pitched himself--actually now that I'm writing this, I see shades of Gatsby here, too). These are images and ideas very rooted in whiteness.

And that's how we end up here: 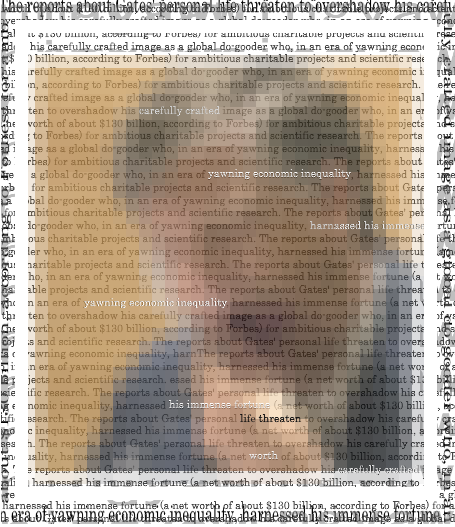 Carefully Crafted, Jeni De La O (2021)
The core image is a hyper pixilated and semitransparent candid of Bill Gates yawning at a function. I couldn't dismiss the phrase "yawning economic disparities.” The frame is made up of that paragraph from the Yahoo story, as is the main overlay. I added highlights to the overlay by retyping text on a separate layer in different colors. White to represent philanthropic forces (white knights/great white hope/etc), black to represent impact (creators/impact/scortching); greyed out the main text to indicate the nature of philanthropy in general when viewed from a lens other than that of the giver. The "matting" whites out big letters that repeat the word "yawning,” blown up/distorted to look like pixels, mirroring what they represent: the indifference of wealth towards the systems of oppression and economic exploitation that prop it up. This is why the matting is "whiting out" the yawning (instead of blacking out).
Did I nail it? Not quite, but it's a working process ;) I might continue to play with this piece or turn it into a series of studies. Not sure. But for sure the next iteration will include a thicker "frame." (This should solve the issue of making that last "carefully crafted" pop without popping out!!)
Programs used to create this: PAINT dot net (17 layers), Snipping Tool, Chrome.
Labels: erasures paint.net philanthropy technology vispo visual poetry 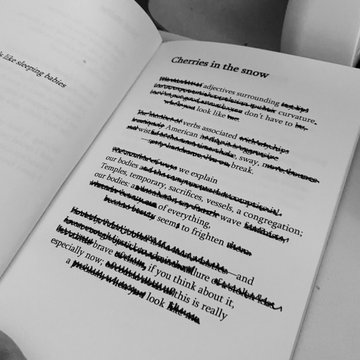